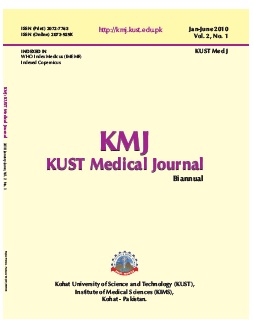 We report a case of double uterus in a 32 years old lady, G7P5 having previous one C-section who presented

with 35 weeks pregnancy along with severe scar tenderness. Clinical examination and ultrasonography revealed 35 weeks fetus with breech presentation and severe fetal tachycardia. On pelvic examination, she had long uneffaced cervix with fresh bleeding. Emergency cesarean section was performed. An alive premature female baby was delivered through incomplete rupture of uterus and was sent to nursery. Patient had two separate uteri with separate adnexae. On fifth post operative day, pelvic examination in the OT was performed which revealed two cervices with single vagina. On the same day complete renal scan excluded any associated renal pathology.