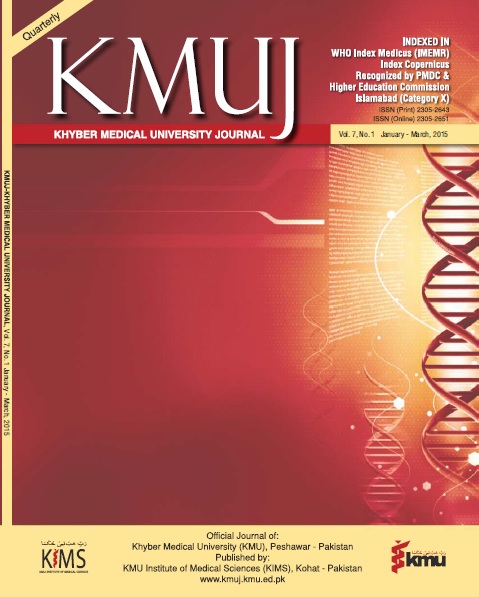 Non-communicable diseases (NCDs), are the major cause of mortality, accounting for 38 million annual deaths around the world.The four main NCDs (cardiovascular diseases, cancer, chronic respiratory diseases and diabetes) are accounting for 82% of all NCD deaths.1 About, 80% of all NCD deaths occur in low- and middle-income countries.2 In Pakistan, NCDs are the leading cause of morbidity and mortality.3 According to WHO country profile, NCDs are contributing for 50% of total deaths in Pakistan and the probability of dying from 30- 70 years of age, due to four main NCDs is 26%.4

Diabetes mellitus is ranked 4th among NCDs causing deaths, accounting for 1.5 million global deaths each year.1 Worldwide, estimated prevalence of diabetes was 9% among adults (aged 18+ years) in 2014.5 According to International Diabetes Federation (IDF)6, 382 million people, aging between 40 and 59 years across the world, are currently living with diabetes and the estimated 55% rise will lead to 532 million diabetics in the year 2035. Eighty percent of diabetics live in low- and middle-income countries. Alarming situation is that 175 million people with diabetes are undiagnosed. In 2013, 548 billion US dollars were spent on health expenditure related to diabetes.6

In Pakistan, an effort was made in 2003 through a public private partnership to frame a National Action Plan for NCDs, prevention, control and health promotion in Pakistan.16,17 However, according to WHO, Pakistan  has got a very poor national systems response of to NCDs. It has no operational multisectoral national policy, strategy or action plan for integration of various NCDs/related risk factors; promotion of physical activity and healthy diets. There are no evidence-based national guidelines/protocols/standards for the management of various NCDs. Pakistan is lacking any NCD surveillance and monitoring system for reporting against the nine global NCD targets.4  All these factors are contributing to the failure of our national action program for NCDs in achieving its targets.

As compared to other NCDs, more work has been done on prevention and control of Diabetes in Pakistan. Diabetic Association of Pakistan (DAP) was established in 1966 and was affiliated with IDF in 1967.18 Since its inception DAP is continuously involved in improving diabetes care and prevention in Pakistan. Although, field activities of DAP are mainly restricted to Karachi and Sind province only, DAP was involved in launching first four National Diabetes Action Plans in 1996–98, 1999–2001, 2001–2004 and 2005–2009.19 However, according to IDF reports, these plans have  not been implemented and IDF is now supporting Pakistan in developing and implanting national NCD program.IDF scorecard for Pakistan, highlighted that government funding and services provided by health system for diabetes are not sufficient due to budget restraints and inadequate distribution of funding. Pakistan is spending only 46 USD per person with diabetes, which could prevent only 0.4% of diabetes related deaths. There is no framework for diabetes monitoring and surveillance in Pakistan.20 Pakistan needs to adopt the global Monitoring Framework on NCDs as recently adopted by India.

Beside DAP, Pakistan Endocrine Society (established in 2001), National Association of Diabetes Educators of Pakistan, some Diabetic Institutes and other groups working in Pakistan are also attempting hard to improve the diabetes care and prevention in Pakistan. After devolution of health sector service delivery to provincial governments, Federal Govt is spending Rs.26.8 billion in 2014-15 fiscal year on health sector with main focus on Millennium Development Goals, polio, maternal & child health, family planning/primary healthcare, HIV, TB and hepatitis.21 Except for cancer, no specific fund allocation was done for NCDs. Diabetes and other NCDs have not been focussed by federal and provincial governments. Only provincial Govt. of Khyber-Pakhtunkhwa, in 2014, took initiative in diabetes management by establishing Insulin Bank in 10 major hospitals of the province, at a cost of Rs. 25 millions. However a genuine comprehensive, collaborative national action plan for diabetes and other NCDs is lacking. Developing policies for prevention and treatment of diabetes and its complications, involvement of all stakeholders, provision of adequate funding, availability of affordable high-quality essential medicines/technologies, improved access to available services and effective monitoring and surveillance system can lead to an effective and sustainable national action plan. However, the main issue of implementation of such plans needs to be addressed by the decision making bodies of Pakistan to achieve its targets, set by WHO and IDF.