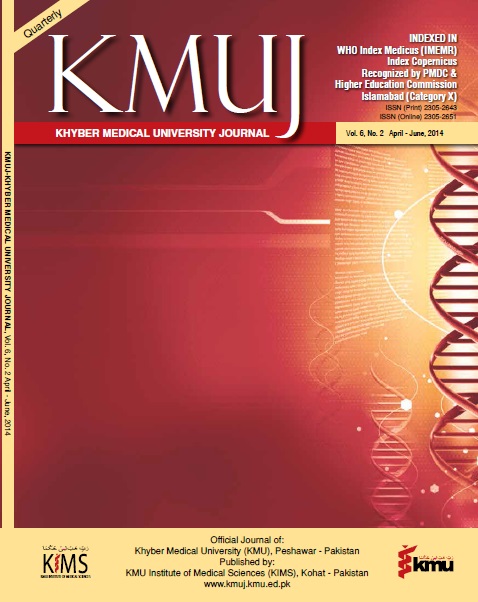 Right to medical care and the right to, a standard of living adequate for the health are included in the Universal Declaration of Human Rights by the UN general assembly.1 However, high cost, poor access to the health care and inadequate quality are the main hurdles in providing free and adequate health care at affordable cost to all people. In USA, the recent legislation “Patient Protection and Affordable Care Act” commonly called as “Affordable Care Act” or "Obamacare”, focused more on affordable and quality health insurance.2

Successful health system requires resources in order to provide health services to people. The cost of health care comes from health financing which considers as how resources are generated and used in a health system. This principle is in line with WHO universal health coverage policy.3

Pakistan is the sixth most populous country in the world with approximately 190 million population, with around 64% of the population living in the rural areas.4,5 Health service delivery system in Pakistan was federally administered in the past, however after 18th amendment there was devolution of power from federal government to provincial governments which shifted the implementation of health programs through provincial governments. This created an opportunity to do reforms within system in order to make people friendly policies so that the goals of equitable health system can be achieved.

Pakistan is research productive nation and has delivered important institutional as well as community based innovative interventions like school-based mental health programmes6 and community-based lady health workers.7These interventions had tremendous impact on the health care system and health of common man in general.

Spending for health in Pakistan has always been considered lesser than expected. The annual per capita expenditure on health in Pakistan as per National Health Accounts 2009-10 are 31.2$ (approximately Rs. 2611). Although all governments claimed to work for the improvement of health service delivery however allocated budget for health showed little improvement over time. For instance, the total health (including government and nongovernment) expenditure in fiscal year 2007-08 was Rs 346 billion which was increased to 448 billion in fiscal year 2009-10(an overall increase of 29%, also including inflation of services and supplies). However, out of total health expenditure in Pakistan, only 29 % were funded by government.8

Pakistan has a mixed public–private healthcare delivery system providing primary, secondary and tertiary healthcare services.10 The infrastructure of health sector in Pakistan comprises of dispensaries, basic health units (BHU), rural health centres (RHCs), district hospitals and the provincial teaching hospitals. Pakistan Economic Survey 2012-13 indicates that, there are 1096 hospitals, 650 RHCs, 5527 basic health units (BHU), and 5310 dispensaries in Pakistan.  For 1099 persons, one doctor is available while population per one hospital bed is 1647.9

Strong public sector is supported by private sector in Pakistan, which is not properly structured with weak regulation. According to Pakistan social and living standards measurement (PSLM) Survey, 67.4 % of Pakistani households consult private sector health consultants for their health related problems.11 The private health service providers in Pakistan include doctors, nurses, paramedics, laboratory technicians, pharmacists, drug sellers, traditional healers and unqualified practitioners.12 In Pakistan, private health services comprise of 73,650total private healthcare institutions, 8 tertiary care hospitals, 692 small and medium sized hospitals and 20,000 beds.13 Although, the primary health care is widely distributed but majority of private tertiary health care services are established in urban areas only. Despite vast public sector network, it is observed that many of the health facilities remain non-functional due to non-availability of health staff. Due to rapidly growing population, the existing number of public and private health institutions, facilities and services are not sufficient to cope with the health care provision to all people.9

Analysis of financing sources shows that almost two third of national health expenditure is from out of pocket and government spends only 2.6 % of its total annual budget on  health.14 The government part of health care financing mainly goes in to preventive, curative and infrastructure components where as that of private sectors and NGOs mainly goes in to curative part. The irony however is that despite limited investment in health not all the allocated resources are utilized in health sector. The problems extend from timely release of resources for allocated purposes to lack of planning and modes of spending in government sector. One of the main reasons for poor spending is that there is limited community involvement in planning and monitoring services. Health care professionals also do not care about community interest while investing in health care. In private sector there is some focus on public interest but that too is business driven and is meant to gain public interest at the cost not afforded by majority.

Improvement in health has economic implications. Investment in health sector in recent past has shown improvement in health indictors. The Life expectancy has slightly improved over years from 59.1 years in 1990 to 64 years in 2005. Infant and maternal mortality rates decreased significantly over time.14 According to Pakistan economic survey 2006-07,15 healthy population positively contributes to the economic and social development. Therefore, a country’s investment in health sectors can have a long lasting effect on its prosperity. If people are healthy, the productivity and economic development will automatically improve.

Pakistan not only has the burden of communicable diseases but also non-communicable diseases contribute to public health problem. There is shortage of medical and paramedical staff at all levels. Some of the available staff lacks commitment and dedication. Corruption is a major challenge for health system, which not only includes absenteeism from work but also includes unethical behaviour and malpractices with patients. There is no regulation on charging  from patient so health care providers charge illegal fees. There is corruption in the drug supply as there is a huge influence of pharmaceutical companies in procurements. Poor planning leads to misallocation of resources and there is no concrete health policy which leads to vague outcome in terms of priorities setting. There is political influence, which affects smooth running of health facilities at grass root level.

There is immediate need of reforms at provincial level in order to modify the health care system according to modern needs and requirements, focusing mainly on primary health care as well as investing in advanced health care. There should be focus on capacity building of existing staff, ensuring their skill development in clinical practice, leadership, planning and monitoring. Provinces need to focus on preventive programs like immunization program to control vaccine preventable diseases. There is a need of a strong monitoring and evaluation activities to ensure smooth running of programs. Health programs also need to consider integration of health activities at provincial and district level to maximize use of resources and avoid duplication. There is a need to streamline private sector, especially NGOs. Private sector can take active part in social insurance schemes.16 There are lot of opportunities in Pakistan health care system which needs to be identified and benefitted for improving service delivery to people in order to fulfil the goal of universal health coverage.