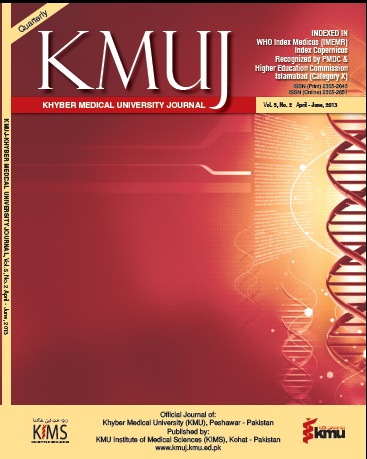 Pakistan is the 6th most populous country of the world with a total population of 184.35 millions in 2012-13.1 Coping with a decade long war on terror, Pakistan is facing lot of other challenges to the health of its population. The health related issues are contributing to the financial burden on the struggling economy of Pakistan. Pakistan spent about 448 billion rupees as total health expenditure in the fiscal year 2009-10 with a 29% increase than 2008-9.2 Although the male and female life expectancy has increased up to 62.6% & 67.8% respectively in the year 2010 as compared to 61.5% & 64.5% in the year 2000,3 still the years of life lost due to premature deaths is a great loss for the country. The increase in life expectancy is also increasing the exposure to the risk of non-communicable diseases (NCD).4 Globally, the NCD contributed to the 63% of the total 57 million deaths in 2008 and almost 80% of these NCD related deaths were in low- and middle-income countries.5 In Pakistan, NCD accounted for 46% of all deaths in 2008 with estimated NCD deaths of about 380,000 and 300,000 in males and females respectively.6

The three major NCDs with highest mortality rate are cardiovascular diseases, cancers and chronic respiratory diseases.5 The leading NCDs are preventable and share some common modiable risk factors like smoking, alcohol, diabetes mellitus, hypertension, dyslipidemia, overweight/obesity, unhealthy diet and insufficient physical activity.  According to National Health Survey of Pakistan (1998), the prevalence rate of hypertension, diabetes and hypercholestremia in population over the age of 45, was 33%, 25% and 12% respectively.7 All these figures reflect the higher prevalence of metabolic syndrome in Pakistan, reported to be ranging from 18% to 46%.8 Although there are many definitions of metabolic syndrome but the agreed core components of the metabolic syndrome are obesity, insulin resistance, dyslipidemia and hypertension. International diabetes federation’s (IDF) definition of the metabolic syndrome include central obesity plus any two of the four factors i.e. raised triglycerides, reduced HDL cholesterol, raised blood pressure and raised fasting plasma glucose. This shows that the main emphasis is on obesity.

Obesity and overweight are defined as “abnormal or excessive fat accumulation that may impair health”. Worldwide, overweight and obesity are determined by various anthropometric measurements like body mass index (BMI), waist circumference (WC) and waist-to-hip ratio (WHR). WHO used BMI to define overweight (BMI > 25) and obesity (BMI > 30).9 Although obesity is defined by measuring BMI, however the excess of body fat in the abdomen, measured simply by waist circumference, is a better indicator of the metabolic syndrome than BMI.10

It has been documented that due to multiple factors, Asian populations have a higher percentage of body fat and BMI than European populations.11 Therefore, the experts and the members of the international obesity task force have proposed  a lower cutoff values of BMI for the definitions of overweight (23.0–24.9 kg/m2) and obesity (>25.0 kg/m2) in Asian populations.12,13According to WHO figures about global population of adults aged 20 and over In 2008, 35% were overweight and about 12% were obese. Each year about 2.8 million adults around the world, die because of obesity related causes.9 In Pakistan one fourth of the general population was overweight or obese as per Asian-specific BMI cutoff of 23 kg/m².14 Female gender, increasing age, urbanization, high literacy rate, and high socioeconomic status were significantly associated with overweight and obesity. In this current issue of Khyber medical university journal, a study on medical students showed that 16.2% of the students were obese and 15% were overweight.15 This shows that younger generation of Pakistan is at increased risk of morbidity and mortality due to obesity related complications.

Research has proved that obesity is a major cause of NCD and it can lead to serious cardiovascular morbidity and premature deaths. This is a serious public health problems and needs urgent attention as it can be prevented by taking appropriate measures. Various factors like genetic predisposition, ethnicity, hormonal, metabolic, nutritional, eating behaviors and sedentary life style are all contributing to the pathogenesis of obesity. However the major factor is caloric imbalance due to excess energy intake and poor consumption of the energy. Pakistan is a country where the concept of healthy diet among the general public is totally changed. Pakistani diet is usually “energy-dense” with higher proportion of saturated fats, trans-fatty acids and free sugar contributing to high caloric intake. Use of “desi ghee”, high intake of meat, judicious use of sweets in celebrating important events of life and over eating are common dietary practices in Pakistan. Due to accelerating prices of staple foods like cereals, pulses, vegetables and fruits, common people prefer the cheaper ways of energy like fats and sugar.  Use of industrial processed foods, fast foods, junk food and sugared fizzy drinks is getting very popular in younger generation. Rapid urbanization and modernization is also leading to the use of high fat diet instead of traditional low fat diets.

Besides unhealthy dietary habits, changing life style and physical inactivity are the main contributing factors for the increased prevalence rate of obesity in Pakistan.16 Owing to urbanization, majority of the people are engaged in sedentary work and use of computers in the offices and homes is now increasing several fold. Various modes of transportation in the cities and over use of personal cars, lead to reduced everyday physical activities. Due to worst law and order situation and day to day street crimes in major cities, people avoid walking and cycling in daily life activities. Less time is spent on the leisure-time exercise and the average recommended level of physical activity is not achieved by majority of the people. The lesser is the distance travelled per person per year, the heavier will be the burden on the national health expenditure.

Pakistan needs to develop a national strategy to control obesity in its population by implementing the recommendations of the WHO global strategy on diet, physical activity and health.17 The implementation program should integrate all stakeholders like health department, print and electronic media, nongovernmental organizations, and private sector. The primary focus should be on the measures necessary for increasing the public awareness and understanding about healthy diet and physical activity and its impact on national health. Education programs in schools and colleges should be arranged across the country regarding healthy eating habits and promoting physical activity in younger generation. Legislation with proper implementation of school based programs for sports and other physical activities should be ensured. Sports grounds and stadium facilities may be provided in every city, town and village. Nation should be mobilized to adopt the habit of regular physical activity of 150 minutes per week for adults and 60 minutes a day for children. Transport policy in cities should also focus on promoting culture of walking and cycling in general public and special walking paths may be developed for this purpose.

Special emphasis may be laid on healthy diet and avoiding use of extra fats and sugars for energy. People should be encouraged to utilize fresh vegetables, fruits, legumes, whole grains and high fiber diets. Eating habits of children and teenagers should be monitored and unhealthy diets should be discouraged. State should strictly regulate the marketing of foods and nonalcoholic drinks for the children and ensure that marketing companies are not playing with the health of our future generations. By adopting a healthy life style, using a balanced diet and ensuring sufficient physical activity, we may be able to maintain normal weight and health.