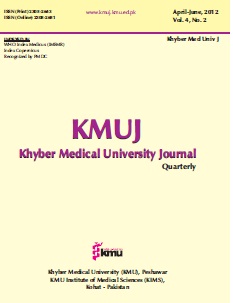 Objective: To find out the frequency of raised C- reactive protein (CRP) levels in patients with first-ever acute ischemic stroke.

Methodology: This hospital based descriptive (case series) study was carried out in Neurology Unit, Lady Reading Hospital, Peshawar, Pakistan from March 2011 to December 2011. A total of 100 patients with first-ever acute ischemic stroke, aged 18 years and above and of either gender, were included by convenient sampling technique. National Institute of Health stroke scale (NIHSS) was measured at the time of admission to assess stroke severity. Within 24 hours of admission high-sensitivity (hs)-CRP levels were measured. Data were analyzed using SPSS version 15.0.

Conclusion: hs-CRP is elevated in a significant number of patients with acute ischemic stroke. An elevated CRP was associated with increased stroke severity.