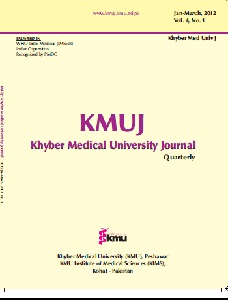 Objective: To compare the hip joint perfusion (HJP) and hip joint effusion (HJE) of affected and unaffected joints ofpatients with Perthes disease (PD) and transient synovitis (TS) with the help of doppler ultrasound.

Methodology: This study was conducted at Children Clinical Hospital No. 1, Ivanovo, Russia from 01.09.2001 to10.01.2006. One hundred and one children diagnosed as TS and PD were examined. Hip joint perfusion and hip jointeffusion were measured on Doppler ultrasonic examinations, carried out with the help of duplex scanning of thevessels of the hip joints. Patient’s data was analyzed statistically by SPSS 14.

Results: Out of 101 patients 59 (58.4%) children had doppler ultrasound evidence of PD, while 42 (41.6%) had TS ofthe hip joint. In TS, HJE was 2.9 ± 0.20 ml and 2.0 ± 0.02 ml in affected and unaffected joints respectively (p< 0.01)while in PD HJE was significantly increased in stage 1, II and III. HJP of medial circumflex arteries, lateral circumflexarteries, lateral ascending cervical artery and intra capsular ring was significantly decreased in affected joints of TSand PD. Increased circumflex venous flow was observed in TS and first 3 stages of PD. Three children with TS subsequentlydeveloped PD.