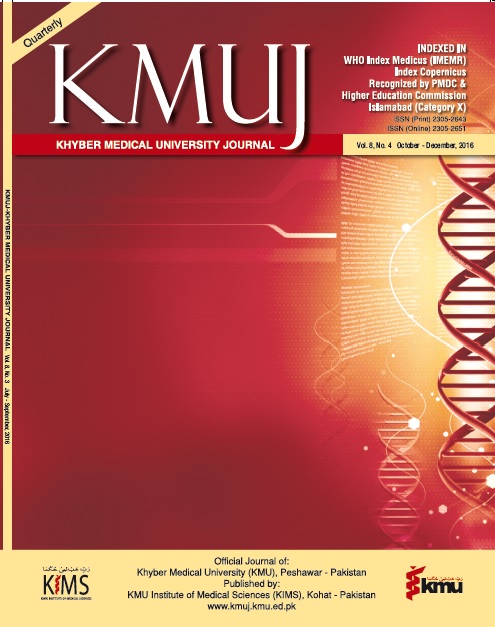 Objectives: To determine the frequency of microbiologically confirmed UTI, pattern of causative organisms and their antimicrobial susceptibility in uncontrolled diabetic patients with gross pyuria in our set up

Methodology: This study was conducted at Department of Medicine , Teaching Divisional Headquarter Hospital KDA Kohat and  Qazi Medical centre, Kohat, Pakistan during the period January 2015 to December 2015. Ninty six adult diabetic patients (type I and type II) having  uncontrolled glycemia (BRS>200mg/dl) with  gross pyuria (>100 pus cell/HPF on  urinalysis)  and not taking any antibiotic for last 3 days were selected for the study.Urine of selected patients was sent for culture and sensitivity. Those culture reports were considered positive who had colony forming units of 105/ml of urine. Data was collected prospectively on structured proforma .

Results: Out of 96 tested urine  samples 80 (85%) were with positive urine culture report while in 16(15%) cases no significant growth of any microorganism (sterile pyuria) was obtained so overall frequency of microbiologically confirmed UTI was 85%. Out of these 80 positive cases, E.Coli was seen in 68(85%) samples. Isolated E.Coli showed 100% sensitivity to Piperacillin plus  tazobactum  and imipinem but 100% resistance was observed to naladixic acid, norfloxacin, , ciprofloxacin and moxifloxacin.

Conclusion: Escherichia coli was found to be the most predominant isolate, Showing very high drug resistance particularly to naladixic acid, ciprofloxacin and norfloxacin. Well-designed studies are required to study antimicrobial resistance pattern to urothogens in large diabetic population in order to guarantee suitable recommendations for the treatment UTI in diabetics.