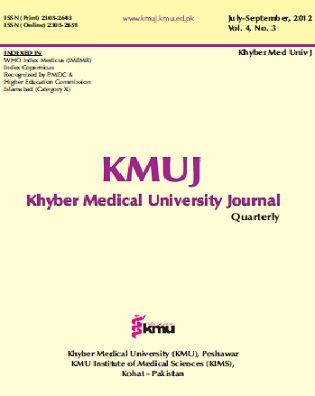 Objective: To determine whether performing myringoplasty in patients having anatomical or physiological dysfunctionin the upper respiratory tract (URT) has any effect on the postoperative results of myringoplasty.

Methodology: This quasi-experimental study was conducted at PNS Shifa and CMH Okara, from August 2005 to July2009. A total of 250 patients, 56% males and 44% females who underwent myringoplasty were included in the study.Medium to small sized central perforations were operated. Patients were separated into two groups. Group A (n-150)had dry central perforations with no deflected nasal septum (DNS), sinusitis, tonsillitis or nasal polyp. Group B (n100)had dry central perforations with mild to moderate DNS, history of tonsillitis, nasal allergy and sinusitis. Both groupswere operated and followed up for 01 year. Data collected was analyzed by SPSS windows version 14.

Results: Out of 250 operated cases 56% were males and 44% were females with male to female ratio of1.2:1. Ageranged from 12-35 years with mean age of 22.4+5 years. After one year of follow up, 128/150 (85.33%) patients ingroup A had intact graft with improved hearing standards up to 25dbs as compared to 60/100 (60%) patients in groupB (p<0.001). Forty patients with graft failure had a history of an attack of upper respiratory tract infection resulting inear discharge and graft failure.

Conclusion: Anatomical or physiological dysfunction in the URT due to DNS, tonsillitis, nasal allergy and sinusitisadversely affect the outcome of myringoplasty and should be addressed first before performing myringoplasty.